A pyrometer measures the heat radiation emitted from a surface. The warmer the object, the more heat radiation is emitted and the shorter the wavelength of the radiation. If the pyrometer was previously calibrated at a standard radiation source, an absolute temperature value can be obtained.

The heat radiation emitted also depends on the type of surface. Plastics have an almost ideal emissivity of nearly 1. Bare metals, on the other hand, have a much lower emissivity, so that the measured temperature appears too low without correction. 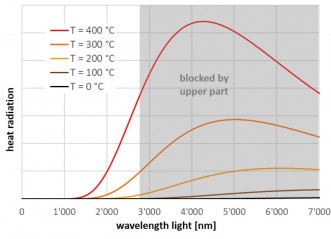 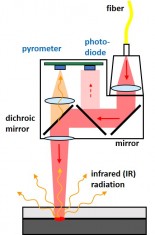 In the temperature range of 100-400°C, which is interesting for plastic welding, the heat radiation in the infrared range of the spectrum is around a few micrometers wavelength.

Since in laser plastic welding the weld seam is not on the surface but inside the two parts, the emitted heat radiation is influenced by the upper part. The infrared radiation at longer wavelengths is absorbed again in the upper part and does not reach the upper surface. So only the shorter wavelengths can be used for pyrometer measurement. The detectors typically used are semiconductor photodiodes that are sensitive also well above 2000 nm.

As the heat radiation is partly absorbed in the upper part, an absolute temperature value can no longer be determined, but only a relative temperature signal. This can be compared with signals for the same part with good welds. For example by envelopes curves that must not be exceeded or undercut by the pyrometer signal.

For an absolute temperature value, the pyrometer would have to be calibrated specifically for the type of plastic and thickness of part. In reality, this part-specific calibration is not done but the relative temperature signal is anaylzed.