Quasi-simultaneous - melt off as process control

Instead of a single traverse of the welding contour, it is scanned several times per second. The weld seam heats up gradually over its entire length and melts everywhere at the same time. The liquefied plastic is pressed out of the weld seam by clamping pressure and the next layer of plastic continues to melt underneath. Over time, a welding rib in the weld seam melts and a setting path becomes measurable - similar to ultrasonic or vibration welding. 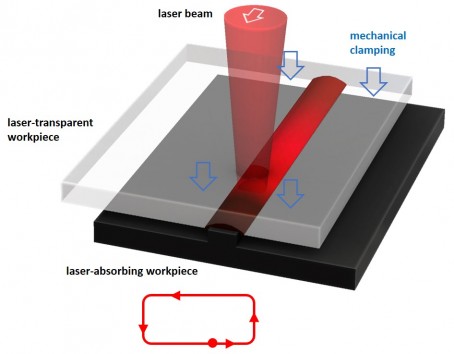 Since the laser beam must be moved very quickly for quasi-simultaneous welding, a galvo scanner is usually used as the optical system. Depending on the lens of the galvo scanner, working fields of different sizes can be scanned. With the size of the working field, however, the size of the spot of the laser beam and the working distance also increase.

The welding rib has a rectangular design and is located in the lower part. This distinguishes laser welding from ultrasonic or vibration welding, where triangular welding ribs are used, which are usually located in the upper part. 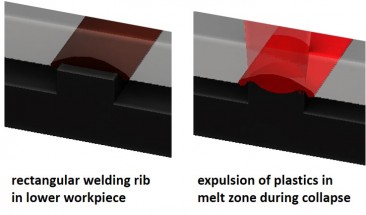 An empty volume can be provided in the design for the escaping melt during collapse in order to catch it selectively. The melt is then not visible from the outside and cannot damage sensitive parts such as electronics inside the parts.