In the simultaneous and quasi-simultaneous process type, the plastic in the weld seam is simultaneously liquid and can be pushed out by the applied clamping forces. If a rectangular rib was designed in the weld seam, it can be melted off step by step. The collapse path from the upper to the lower part is measured, which is typically a few hundred micrometers. 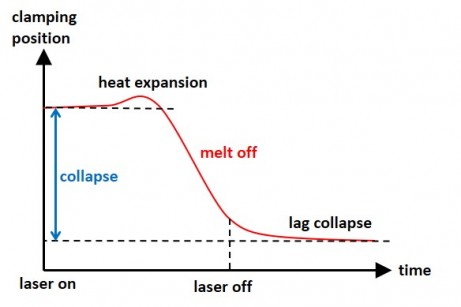 During the collapse, a small extension is first measured, depending on the plastic, which can originate from thermal expansion or melting.
As soon as the plastic is sufficiently liquid, it is pushed out from the weld seam and the plastic underneath is further melted so that a collapse begins.
Once the laser is switched off, the collapse does not stop immediately. First, the plastic has to cool down and solidify in the weld seam, so that a small lag of the collapse path is observed.

The melting down of a rib can also be helpful for small gaps between the parts. The collapse closes the gaps and plastic melt can flow bridge the gaps.