Instead of using an external clamping unit, the clamping pressure is applied by a glass ball, which rolls over the components to be welded and simultaneously serves as a focusing lens for the laser. 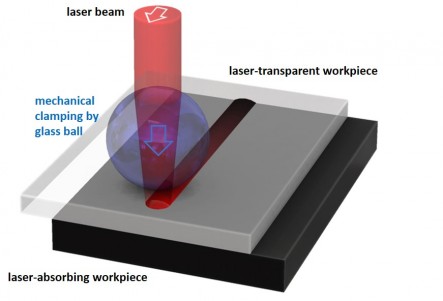 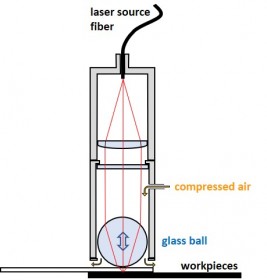 The ball optics is particularly useful for large-area parts such as foils or textiles when a correspondingly large clamping unit is no longer possible or sensible.
Instead of an xy-axes system, the ball optics can also be mounted on a robot arm to weld parts in three dimensions on curved surfaces.

One sub-variant of the ball contour process is the Globo process from Leister (patented until 2022), in which the glass ball is pressed downwards onto the component by the optics itself and not by the air pressure. The compressed air is only used for the air bearing of the ball and not for exerting force.

Since the center of the ball must be kept free for the laser beam, the air bearing only engages at the edge of the sphere. However, it must still have a sufficiently large support surface so that the Globo method is limited to relatively large ball diameters.